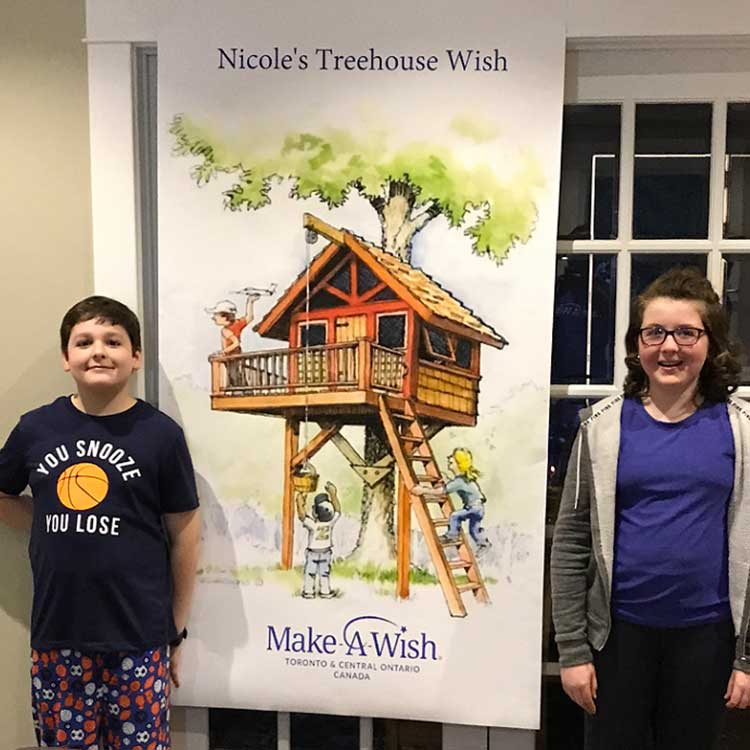 Nicole’s Wish is The Perfect Escape

I wish to have a tree house

Nicole is a shy, smart kid who loves art and dreams of travelling to many different countries in the future. About two and a half years ago, Nicole wasn’t feeling well and experienced a few fevers. After several hospital visits and medical tests, it was discovered that she had leukemia.

Nicole’s family quickly had their world turned upside down by her diagnosis. Her little brother Mikey, 11, worried about his sister and what might happen to her as she went through treatment.

“Honestly, I felt a little bit surprised,” said Mikey. “I felt kind of sad for her because I knew that you had to do a lot of different things and that she might die. So I was really scared and sad.”

The first year of Nicole’s treatment involved many trips to the hospital for her chemotherapy. In her second year of treatment, Nicole had to take different types of pills as part of her treatment protocol, but was happy to be able to spend more time at home as she dealt with the side effects. Nicole has been incredibly brave during this difficult time in her life.

“At the beginning, getting my port access the first time is scary cause it’s like a needle going into your chest, so it’s kind of scary, but then I got used to it,” said Nicole.

Nicole’s family heard about Make-A-Wish from a staff member at her hospital and they got in touch to help make Nicole’s wish come true.

“Nicole thought of a couple of ideas, a couple of them were trips,” said Rosario, Nicole’s mom. “But she felt that the tree house was more permanent, and it was for a longer period of time and she could make it her little hideaway and have her own space.”

Thanks to the incredible volunteers from Team Depot, Home Depot’s associate-led volunteer program, Nicole’s dream of having a tree house in her own backyard became a reality.

“Everybody was on board and wanted to get in there and help out,” said Rod Broschell, Team Depot Captain.

Team Depot worked hard for several days building Nicole’s custom treehouse while Nicole and Mikey made plan for how they would decorate the space when it was ready. They were both excited to put up their artwork from art camp and wall stickers and to soon have a tree house sleepover with their dog, Brandon.

Nicole is doing very well, and her leukemia treatment ended the same month her wish was granted. What a way to celebrate this incredible milestone!

Our sincerest thanks to Team Depot for making Nicole’s wish possible. We couldn’t have done this without you!