Aurélia loves princesses, ballet, animals (especially her dog Shadow), chocolate, and the colours pink and mauve. She enjoys going camping with her family, dressing up as a princess with her sister, have fun on her swing set, playing with her many dolls and wrapping herself in her favorite blanket. She speaks French and English, can count in Spanish and knows several words of Japanese.

Just before her third birthday, Aurélia vomited often, and her parents noticed that her eyes were oscillating. It was the family optometrist who suggested contacting the child’s pediatrician. The aftermath happened at lightning speed as the family rushed to the hospital. Aurélia had a large brain tumor and suffered from hydrocephalus: fluid on the brain. She was immediately taken to the operating room to install two drains to reduce intracranial pressure (she now lives with a permanent drain).

Aurélia remained in intensive care for a month after this intervention, immobilized and on high medication. The whole thing altered the endearing personality of the little one who, in addition, found herself separated from her sister, her best friend. Aurélia also had to relearn how to walk when she got home. Aurélia has been on a research protocol for three years and her tumor has reduced by 70%. Her protocol requires a lot of courage, but she can now run, jump, climb and ride a bike like other children.

“Aurélia is a ball of energy and has a joie de vivre. She is exceptionally resilient and is the happiest and bravest little girl I know,” said Stephanie, Aurélia’s mom.

Thinking about her greatest wish has brought a lot of joy to Aurélia for the past few years. She often looks at her princess dresses and imagines herself doing beautiful activities with her sister and other children. For her sister and her parents, discussing her wish with her is also a moment that gives them hope that she will be even more able to enjoy it as her health continues to improve. 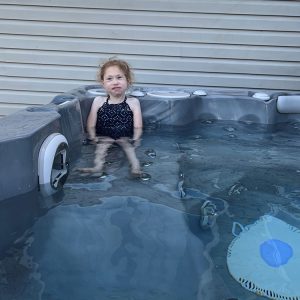