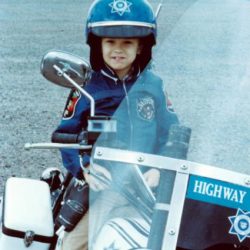 A boy with a big dream and a bigger heart: Most kids wish for things like candy, video games and toys. But for 7-year-old Christopher James Greicius, all he wanted more than anything in the world was to become a police officer. You see, Chris had a life-threatening illness. Even still, protecting and saving the lives of others was all he hoped for.

The little wish that could, and did: On April 29, 1980 Chris got the surprise of a lifetime. A U.S. Customs Officer, who had become a good friend of the family’s, arranged to take Chris on a helicopter ride around the city of Phoenix, Arizona. It was the most magical experience he ever had. And when Chris’ condition took a turn for the worse only a few days later, his true wish was fulfilled: he was presented with an official Arizona Highway Patrol uniform.

The first wish, but not the last: Chris’s smile lit up the entire hospital room as his uniform hung by his window. Although he passed away a day later, this 7-year-old received the greatest gift of all – his wish was granted and he experienced hope, strength and joy during his battle with cancer. And even better, it served as the inspiration for the largest wish-granting organization in the world. Those officers who made Chris’s dream come true realized if they could grant one boy’s wish, then the same could be done for other children.  And so, the Make-A-Wish Foundation® was born.

THE FIRST WISH IN CANADA 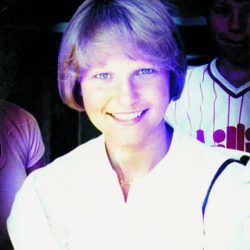 Two big hearts, one great cause:

In 1983, Nigel Brown and Robb Lucy from British Columbia made history by establishing the first Canadian chapter of Make-A-Wish®. After being moved and inspired by the work that had been done by the organization in the United States, Nigel and Robb started a small committee in Canada to help grant the wishes of more children with critical illness.

A wish comes true, more lives are changed: A 13-year-old girl named Debbie, who was suffering with leukemia, wished to go visit her grandparents in Germany. When Nigel and Robb heard about her story, they paid for the trip personally, and Debbie’s wish was fulfilled. Debbie was given a chance to enjoy a heart-warming and intimate experience with her family before she passed away. As a result of Debbie’s wish, Make-A-Wish Canada came to be.

Here today, more wishes granted tomorrow: Today, more than 35,000 wishes have been granted to children across Canada since Make-A-Wish was established in Canada. And it’s with the help of generous supporters like you that more life-changing wishes will continue to be fulfilled.